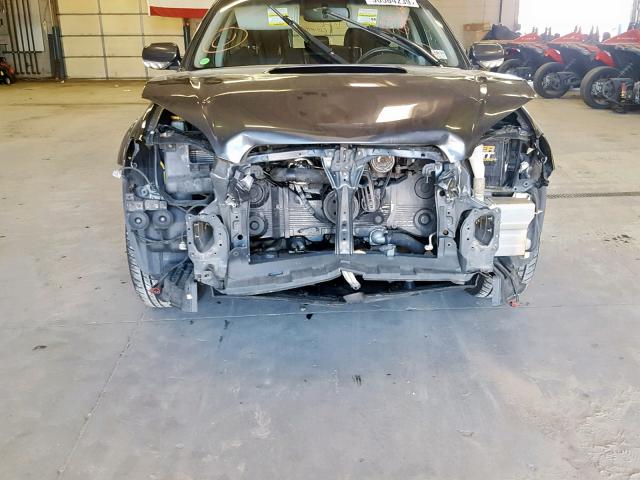 Who hasn’t heard of the Copart Rebuild Challenge? For the last few years, Copart has been putting on a contest where the winner in each category wins $1,000 for the best rebuild project. This year, the categories are: Custom, Powersport, and Rebuild. Here is my entry for the rebuild contest.

This is a 2007 Subaru Outback XT Limited Wagon with a rare 5-speed manual transmission. According to my research, Subaru only made 561 XT wagons with a manual transmission for 2007. When I first started looking for a vehicle, I came across this one 850 miles from my house, in Denver. I saw this car about a month prior to the auction and it sat in my watchlist. I never intended on buying this car to fix it, I wanted to buy it to use it as a donor car for another project.

If you’ve been following my YouTube channel, you know I traded for a 2005 XT Limited and a 2007 XT Limited. The 05 was triple black (paint, interior, and wheels) but had an EJ20X of questionable origins and tuning. I ended up blowing up the motor while driving to work (rod bearing spun) which I later learned was a common issue with these 2.0 motors. Junk! So I needed a complete donor to not only take the motor, but to swap some electronics that my car was missing due to a prior owner stripping the interior.

This 07 came up for auction about 2 weeks ago on the 3rd of June, and without even thinking about it, I threw a lowball bid of $800 at the car about 15 minutes before it rolled across the block. When it came on the block, I was the highest bidder at $750. I won the car, not contest! Was everyone sleeping or did the prospect of potential frame damage scare everyone away? I was in awe when I won the lot. At any rate, after all was said and done and paying 2 days of storage fees until it was picked up, the total came out to a whopping $1,133, add in $649 for shipping to my front door and I am at $1,782! Less than $1,800 for a presumably running and driving Outback XT with a manual transmission that has potentially a bent frame. I’ll admit, it was a huge gamble purchasing this car from some pictures, sight unseen. I had no clue if this car ran, no clue if the timing belt had jumped time in the collision, no clue if there was any other defects with this car. Let’s look at the facts as I knew them before ever seeing the car in person.

$1,800 for a sight unseen parts car when I know I could part it out and make my money back. While the 5 days passed before the car came, I talked it over with Mrs. Boxer Tech and her and I came to an agreement that if the frame was straight, this would be a good candidate for a pretty badass rebuild. Not to mention, I just finished her 07 XT rebuild (more on that in another article), so we’d essentially have the same car, one in automatic and one in manual.

The car came late on Saturday evening about 8:30 PM. It was damn near dark when the car showed up, so an inspection was out of the question. The next morning I started into it. The car was absolutely flawless with the exception of the front end damage and a damaged spoiler. The interior is mint, the engine started up and ran smoothly, and the transmission went into gear very nicely and the clutch felt almost brand new (I just checked the CarFax service history and the clutch only has 8,000 miles on it). I started to take the twisted metal off the front. I had to know if I was going to rebuild it or tear it apart. I finally got down to the bare frame rails and measured using the service points and it is 100% straight. The frame had no damage. I cut the rest of the radiator core support off and went to work looking for new front end parts. Through my connections on my local Subaru enthusiast network, I was able to source a whole nose cut from a JDM Outback for the whopping price of $200.

I contacted the seller and I will be renting a Uhaul truck to go snag it as it is 150 miles away from me. The nose cut contains everything you see here, plus the radiator support, radiator, AC condenser, bumper crash bar, washer tank, and the front fenders. No hood included with this lot, but beggars can’t be choosers when it comes to rebuilding on a budget. A little bit of paint match and it’ll be good to go with a nice JDM front nose. So now my running total on this car is $1,982 not including the one way rental.