Why do people sell their cars to the junkyard when you offer them a better price? In this Boxer Tech Podcast, I show you a prime example of what actually happened to a car I offered the seller a fair price for.

Backstory: A few weeks ago, my buddy Mark, whom I was with at the junkyard that day, shared a Facebook Marketplace ad for a 2000 Subaru Outback with a blown head gasket for $400. The car had 314,000 miles on the odometer, but the body was in good shape, interior was decent albeit dirty, and it had relatively new tires on it. I first asked the seller if it was drivable, to which they confirmed. I offered them $200 for the car.  Now KBB on this car is only about $900-$1,100 in it’s condition and mileage. Not to mention with a vehicle over 300,000 miles, it’s a very hard resell, so my offer was more than fair. The seller declined my offer but said if she didn’t get a better offer, she’ll let me know. 30 minutes later the ad was marked sold and because it was listed on a Subaru Enthusiasts group, I figured another enthusiast had picked it up.

Mark and I were at the junkyard on this day gathering parts to 5 speed swap his Legacy Sedan. I spotted it and started looking at it closer and got deja vu. I asked Mark if it were possible that it were the same car he shared. Having messaged the seller earlier in the week, I pulled up the listing and low and behold, it was the same car. Even had the same badge of ownership on the tailgate. I was crushed. Our local junkyard is a joke of an establishment, but that topic is for another day. Needless to say, they have a monopoly because they are the only junkyard in a 99 mile radius (at mile 100 is another yard they own) and are a huge advertiser on the radio and billboards around the area. They can pretty much buy a car for nothing and charge customers 2-5 times what the yards in Phoenix charge. They give you $120 a ton for a complete car if you haul it in and $85 a ton if they pick it up. I’ve had friends sell large SUVs to them and get $200 and a free tow. Figuring a typical Outback weighs around 3600 lbs, she was lucky to get a check for $150. I could have saved this car for a couple hundred dollars, but instead it’ll never be loved by another owner again. 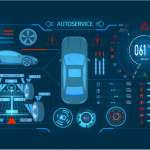